Galerie Scheffel is pleased to announce an exhibition of current works by the Spanish sculptor and installation artist Jaume Plensa in the Jakobshallen in Bad Homburg, Germany. The exhibition will run from 13 November 2019 until 18 April 2020.

Jaume Plensa, born in Barcelona in 1955, is concerned principally with “the interplay between spirit and matter, not mere form”. In his multifaceted sculptural work he poetically dissolves the physical body and converts the intangible into concrete forms. Thus he achieves a poetic intensification and a conceptual pervasion of space beyond physical form. Alongside materials such as stainless steel, bronze, marble or alabaster, Plensa frequently makes use of text, sound and light. Furthermore, for him, silence and the word, thoughts, ideas and dreams all have their own materiality and in their vibrant energy constitute sculptural material. And indeed, Jaume Plensa’s works consistently demand the imaginative participation of the observer – and their presence survives in the mind long after a viewing.

Numerous international awards bear witness to the great esteem in which Jaume Plensa is held around the world – this year alone he was made an honorary member of the Russian Academy of Arts in Moscow and received further honours in Barcelona and New York. Since completing his art studies in Barcelona, he has widely exhibited his unmistakeable sculptures and installations and created more than 50 permanent outdoor projects for public spaces across the globe. They can be seen in cities such as London or Madrid, Chicago, Montréal, New York or Rio de Janeiro, Dubai or Jerusalem, Seoul, Shanghai or Tokyo.

In Germany, Plensa has frequently participated in the Blickachsen Biennale and his eight-metre high sculpture “Body of Knowledge” is regarded as a landmark of Frankfurt University’s Westend Campus. In this country also, his work has been shown in major museum exhibitions – for example at the Lehmbruck Museum, at the Kunsthalle Mannheim, simultaneously at the City of Augsburg’s Gaskessel, Schaezlerpalais and H2 – Centre for Contemporary Art or, most recently, at the Max Ernst Museum.

Over the past twenty years Jaume Plensa’s solo exhibitions at Galerie Scheffel have given an insight into different phases of his creative output – and in 2016 he took part in the opening exhibition at the Jakobshallen, the gallery’s second location by the Bad Homburg castle.

Now, Jaume Plensa has conceived his first solo exhibition for the Galerie Scheffel Jakobshallen. In the spaces of the former church building he presents a carefully orchestrated selection of works in different formats spanning the years 2016 to 2019, underlining their poetic presence and spiritual dimension through a subtle use of lighting. Small bronzes can be seen, as well as several of his delicate “lexical bodies” and a special selection of head portraits, whose inwardly-directed reclusiveness and meditative aura immediately strike the observer. And in the main exhibition space of the Jakobshallen, two four-metre high heads appear to be communicating with each other while their surfaces, with their net-like steel grid structures, seem simulteously to transcend their own physical form.

“The search for the human condition and for the essence of the spiritual is, and remains, the unifying force behind all these works. Thus Jaume Plensa ranks undoubtedly as one of the great artists of our century,” says Christof Trepesch, Director of the Art Collections and Museums of the City of Augsburg, in his speech at the opening ceremony of the exhibition in the Jakobshallen, which Jaume Plensa also himself attended.

The exhibition is open Wednesdays to Fridays from 2pm to 7pm, and on Saturdays from 11am to 3pm (Jakobshallen, Dorotheenstraße 5, 61348 Bad Homburg v.d.H., Germany). Entrance is free.

We will be happy to provide press photographs free of charge. 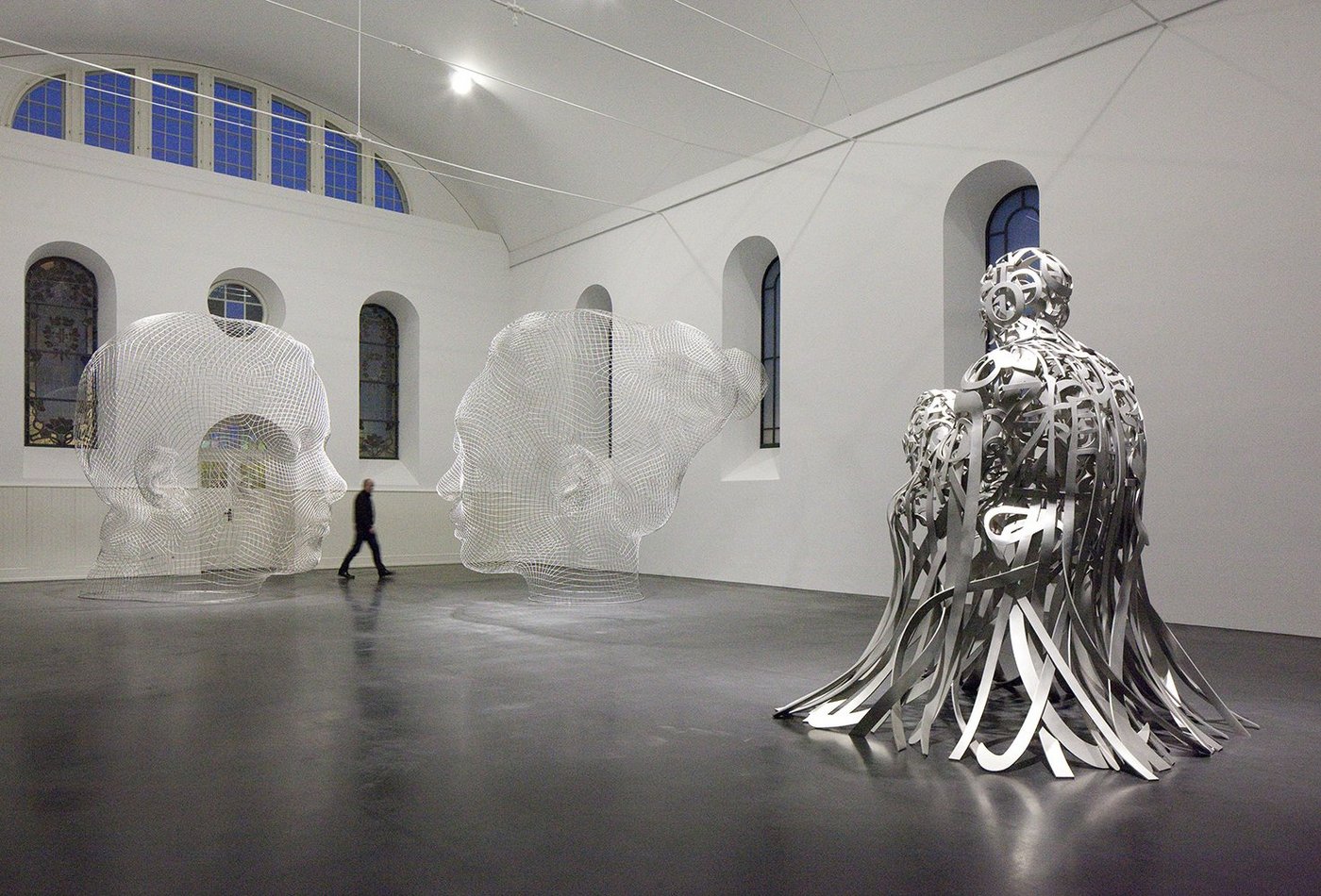